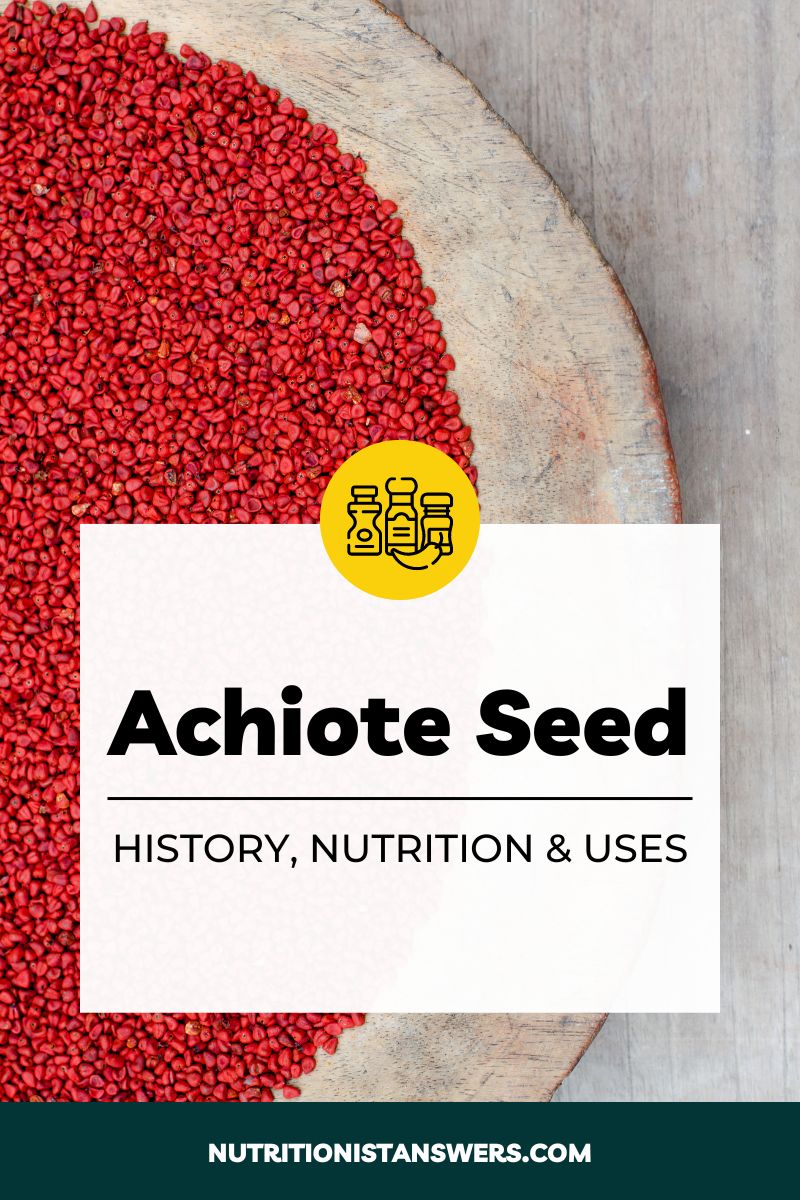 Achiote (also called annatto) is a red-colored seed used as both a culinary spice and natural food dye.

If you’ve ever eaten processed cheese, margarine, or other yellow-colored food products, chances are you’ve had achiote. In fact, annatto is used in up to 70% of natural food colorings worldwide (1).

It is also used as a spice in traditional dishes in Mexico, Central America, and the Caribbean Islands.

In this article, we’ll discuss the history of achiote, its nutritional value, and how to incorporate it into your cooking.

Please note that this article contains affiliate links. If you click one of these links and make a purchase, we may earn a commission. As an Amazon Associate, we earn from qualifying purchases.

Achiote (also called annatto or annatto seed) refers to the bright red seeds of a fruit produced by Bixa orellana, a shrub native to Central and South America (2, 3).

The shrub grows clusters of spiky heart-shaped red fruits. If you split them in half, you’ll see a cluster of 20 to 60 annatto seeds that are small, red, extremely hard, and pyramidal in shape.

These versatile seeds have long been used as both a spice and natural dye by Indigenous peoples throughout Mexico, Brazil, and the Caribbean Islands.

For many years the Mayan people made lipstick from ground achiote seeds mixed with water. For this reason, Bixa orellana is sometimes referred to as the “lipstick tree” (3).

In Europe and North America, achiote is most commonly used as a red-orange coloring agent (referred to as annatto extract) in commercial food products such as butter and cheese (2).

When used in small quantities to color food, achiote doesn’t have much flavor. However, it can also act as a spice in larger amounts, offering a peppery aroma and an earthy, almost smoky flavor.

Other names for achiote:

Achiote goes by many names around the world (1):

Here’s a pronunciation video if you’d like to hear it aloud.

Is achiote a tree nut?

No, achiote is not a tree nut. It is classified as a fruit seed (2).

Are achiote and annatto the same?

The terms “achiote” and “annatto” can be used interchangeably.

“Achiote” is the preferred term in Mexico, while “annatto” is more common in the United States and Europe, especially in reference to the food coloring.

Is achiote the same as paprika?

No, achiote is not the same thing as paprika.

Paprika is a spice made by grinding up dried red peppers, while achiote is the seed of a fruit produced by Bixa orellana (lipstick tree) (2, 4).

There is not much peer-reviewed research available on the nutrient content of achiote/annatto.

Because it is typically consumed in small quantities, achiote is unlikely to contribute many calories to your overall diet (much like other spices used in cooking.)

However, some studies do show that annatto seeds are high in antioxidants, such as vitamin E and carotenoids (2, 5).

The two main carotenoids found in achiote seeds are bixin and norbixin, which are responsible for their vibrant red-orange color (2).

Bixin is dark red in color and fat soluble, while norbixin bright yellow and is water soluble, which makes it possible to use annatto-derived dyes in many applications (2).

Look for these bright red seeds at Latin grocery stores or in the international foods aisle at supermarkets. They can also be purchased online here.

Achiote powder is simply achiote seeds that have been ground into a fine powder. It can add color and flavor to sauces, marinades, spice rubs, and traditional dishes like Arroz Amarillo (yellow rice).

Similar to achiote seeds, you’re most likely to find achiote powder at Latin grocery stores, in the international foods aisle at supermarkets, or online here.

Achiote seeds are most often used to make achiote paste or achiote oil.

Achiote paste is a traditional ingredient in Mexican and Central American cuisine.

It’s made by mixing whole achiote seeds with garlic, spices, and acidic ingredients such as vinegar or citrus juice, then grinding the mixture into a thick paste.

You can make your own achiote paste at home or purchase it at Latin grocery stores or online.

Use achiote paste to make traditional dishes like Pollo Asado (grilled chicken) and Cochinita Pibil (slow-roasted pork), or try mixing some into marinades, sauces, and stews.

Achiote oil is a beautiful red-orange oil mainly used to add color to foods, although it also provides a hint of achiote flavor.

It is made by mixing whole achiote seeds with olive or vegetable oil, then heating the mixture until the oil changes color and straining out the seeds.

You can make your own achiote oil at home or purchase it at Latin grocery stores and online here.

Achiote oil can be used in traditional dishes like Arroz con Pollo (rice with chicken) and Arroz con Gandules (rice with pigeon peas), brushed onto seafood, used in empanadas, or added to soups and stews.

Whole achiote seeds can be stored in an airtight container at room temperature for several years.

Ground achiote powder should also be stored in an airtight container and kept in a cool, dry place. If stored properly, ground achiote can retain its flavor for up to one year.

Achiote paste should be stored in the refrigerator and should stay fresh for up to 2 weeks if homemade or a few months if store-bought.

Keep achiote oil in a glass jar with a tight-fitting lid at room temperature for up to 5 days, or in the refrigerator for up to 2 weeks.

The following processed foods may contain annatto as a natural food dye (1, 2):

Annatto is nontoxic and widely approved as a natural food dye around the world. It is often used as a natural replacement for artificial dyes like Yellow #5, Red #40, and Yellow #6 (2).

Achiote has served as both a spice and dye for centuries, and it continues to be a popular ingredient in Latin American cuisine.

Its vibrant color adds visual appeal, while its slightly peppery flavor adds depth and complexity to many dishes.

Give it a try in your next cooking adventure!

Want to learn more? Check out our full list of foods A to Z.

Amy Richter is a Registered Dietitian Nutritionist based in Missouri. She is an experienced nutrition writer and medical advisor for Healthline and Medical News Today.  Amy is passionate about all things food-related and enjoys translating complex science into easy-to-understand articles.