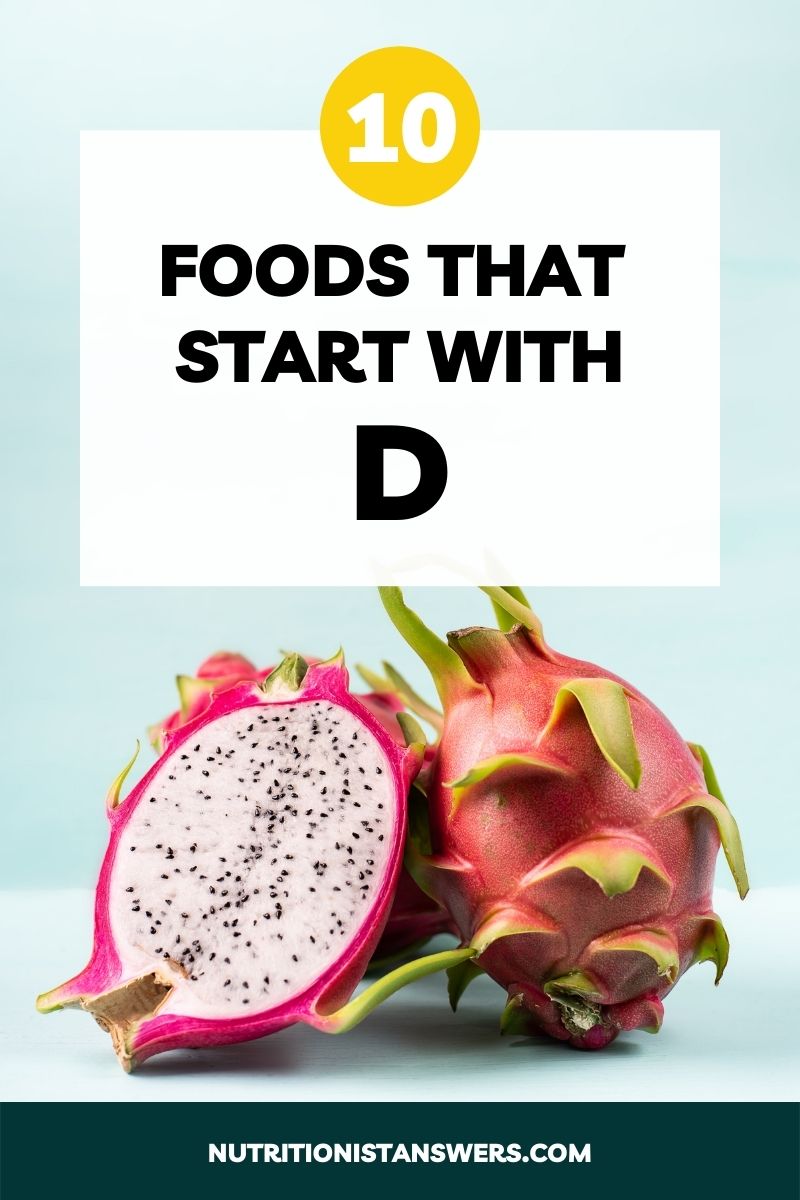 Looking for an extensive list of foods that start with the letter D?

Look no further, we’ve got you covered!

Browse this list of 10 foods that start with D to get some new cooking inspiration, learn more about where each food comes from, and understand the health benefits of each food.

Daikon (also known as Japanese radish) is a cruciferous vegetable and a type of radish that resembles a large, white carrot with thick, green leaves at the top (1).

It is crisp and juicy with a sweet, slightly peppery flavor that tends to be milder than red radishes. The greens are bitter and have just a hint of spiciness that mellows out after cooking.

Like other cruciferous vegetables, daikon contains glucosinolates, a group of sulfur-containing compounds that have anti-cancer properties (2, 3).

You can find it in the produce section at Asian food markets, farmers’ markets, and some grocery stores.

Add daikon to salads and stir-fries for a peppery bite, or simply dice and roast with olive oil along with carrots and potatoes. It can also be used in homemade kimchi to replace Korean radish.

Dandelion is a plant (often considered a weed) that grows throughout the Northern hemisphere (4).

It has small, bright yellow flowers that taste a little bit like honey, and dark green, jagged leaves known for their bitter, earthy flavor.

You might be able to find fresh dandelion greens and roasted dandelion root tea at some health food stores.

Foraging is another option — just be sure to avoid areas that may be contaminated with toxic chemicals, such as roadways and treated lawns.

Use fresh dandelion greens as you would any other leafy green vegetable in salads, stir-fries, soups, and pestos. Blanching can help remove some of their bitterness.

The tender blossoms are especially tasty dipped in batter and fried, but you can also use them to make jelly, syrup, or infused-honey.

Dates are the fruit of the date palm tree, one of the world’s oldest cultivated trees and a native of the Middle East (6).

The two main varieties sold in the United States are deglet noor and medjool. The deglet noor is small with sweet, firm flesh, while the medjool is larger, darker, and has a caramel-like flavor (7).

Despite being relatively high in sugar, dates have a low glycemic index, meaning they cause a gradual rise in blood glucose and can be a good choice for people with diabetes (8, 9, 10).

Dried dates are available year-round at most grocery stores in the dried fruit section. Other date products, such as date syrup and date sugar, can be purchased from health food stores or online.

For a tasty treat, cut a lengthwise slit in several pitted dates, then fill the insides with your favorite nut butter, dip in melted dark chocolate, and cool in the freezer before enjoying.

You can also use dates to sweeten smoothies and sauces, or blend them with oats, nuts, cocoa, or spices to make energy balls and other no-bake desserts.

It has an oblong shape, with pale yellow skin and green or orange stripes. The yellow-orange flesh tastes naturally sweet and buttery, similar to sweet potatoes.

Like other winter squash, delicata is high in carbohydrates, fiber, potassium, and beta carotene, an antioxidant that can be converted to vitamin A in the body (11, 12, 13).

Look for delicata when it’s in season, during late summer and fall, at farmers’ markets, health food markets, and grocery stores.

Delicata squash are best enjoyed roasted — simply slice into semicircles or rings, toss with olive oil and salt, and transfer to the oven to bake at 425°F for 20 to 30 minutes.

Another option is to slice the squash in half, scoop out the seeds, and fill the inside with seasoned ground meats, lentils, vegetables, or nuts before roasting.

Its delicate, feathery leaves have a fresh, grassy flavor with notes of anise and lemon. In the United States, it’s most commonly used to flavor cucumber pickles.

Dill produces tiny yellow flowers that give way to flat, brown seeds, which are used as a spice and taste similar to caraway.

Fresh dill and dill paste is available in the produce section at most grocery stores, while dried dill and dill seed are typically found with the herbs and spices.

If you have a garden or even just a sunny window, it’s very easy (and super affordable) to grow your own dill. It can be planted in the spring and harvested throughout the summer.

Use fresh or dried dill to add flavor to salad dressings, dips, breads, and pickles. It also pairs well with fish (especially salmon), potatoes, and eggs.

Dragon fruit (also called pitaya) is a tropical fruit, native to Central America and Southeast Asia, that belongs to the cactus family (15).

It is large and oval-shaped with bright reddish-pink or yellow skin (depending on the variety) and pointy green scales.

The flesh, which can be either white or bright pink, is speckled with tiny black (edible) seeds. It tastes mild and sweet, with a flavor similar to a combination of kiwifruit and pear.

Dragon fruit has gained popularity as a “superfood” due to its high concentration of antioxidants, including vitamin C, lycopene, and betacyanin (16).

Fresh dragon fruit can be difficult to find in some areas of the United States, but the frozen fruit is often available at grocery stores.

To enjoy this unique fruit, simply slice in half and scoop out the pulp with a spoon, or peel the skin and slice the pulp into small pieces and add to smoothies and salads.

Freshwater drum (Aplodinotus grunniens) is a type of fish, native to North America, known for their grunting sound made by males during the breeding season (17, 18).

They have a reputation for being too bony to eat, but they can actually be quite tasty. The flesh is firm and fatty, with a mild, sweet flavor.

Unless you live near a river or lake stocked with drum, you’re probably going to have a hard time finding it fresh, but frozen fillets are sometimes available online.

The most popular ways to eat drum are breaded and fried or blackened with Cajun seasoning, but it can also be baked, broiled, or grilled.

Ducks are aquatic birds belonging to the family Anatidae (21). In the United States, the White Pekin is the breed most commonly used for meat.

China is thought to be one of the first countries to domesticate ducks, and their meat is used in many traditional Chinese dishes, including Peking duck (22).

Some stores also sell duck fat, which has a rich, savory flavor — use it to roast potatoes, sauté vegetables, and pan-fry steak.

The most popular way to prepare duck is roasting, typically with a variety of seasonings like honey, orange juice, soy sauce, or rosemary.

Dulse (Palmaria palmata) is a red seaweed that grows along the northern coasts of the Atlantic and Pacific Oceans (25).

Its deep burgundy leaves have a salty, ocean-like flavor and a chewy texture when eaten fresh. Dried dulse is a bit crispier and tastes slightly smoky.

Dulse is incredibly high in vitamin B12, with 200 mcg (833% DV) in a single 3-gram serving, making it an excellent choice for vegans who typically struggle to get enough of this nutrient (20, 26).

Fresh dulse is difficult to find in the United States, but most Asian food markets carry dried dulse, either as whole leaves or flakes.

Sprinkle dulse flakes over scrambled eggs, popcorn, and salads, or pan-fry dried dulse in oil and flavor with liquid smoke for a crispy bacon substitute.

Durian is a tropical fruit native to Southeast Asia, where it is highly prized and referred to as “the king of fruits” (27, 28).

It is large, ranging from 6 to 12 inches in length, and brownish-green with thorny spikes. The flesh is typically a creamy yellow color and has a custard-like texture.

Durian is notorious for its pungent odor, caused by aromatic compounds that smell like a combination of fruit, honey, caramel, roasted onion, rotten egg, and skunk (28).

The best place to search for fresh durian is the produce section at Asian food markets. It is also available frozen, freeze-dried, candied, or as deep-fried chips.

Traditionally, durian is eaten as a snack either on its own or with sticky rice, but it can also be used to make cakes, ice creams, and curries.

From daikon to durian, there are plenty of delicious foods that start with the letter D.

We hope this list has inspired you to be adventurous and try some new foods, or to gain a new appreciation for some of the foods you already eat every day.

Comment below to let us know which of these foods are your favorites, and how you use them in the kitchen!

This site uses Akismet to reduce spam. Learn how your comment data is processed.