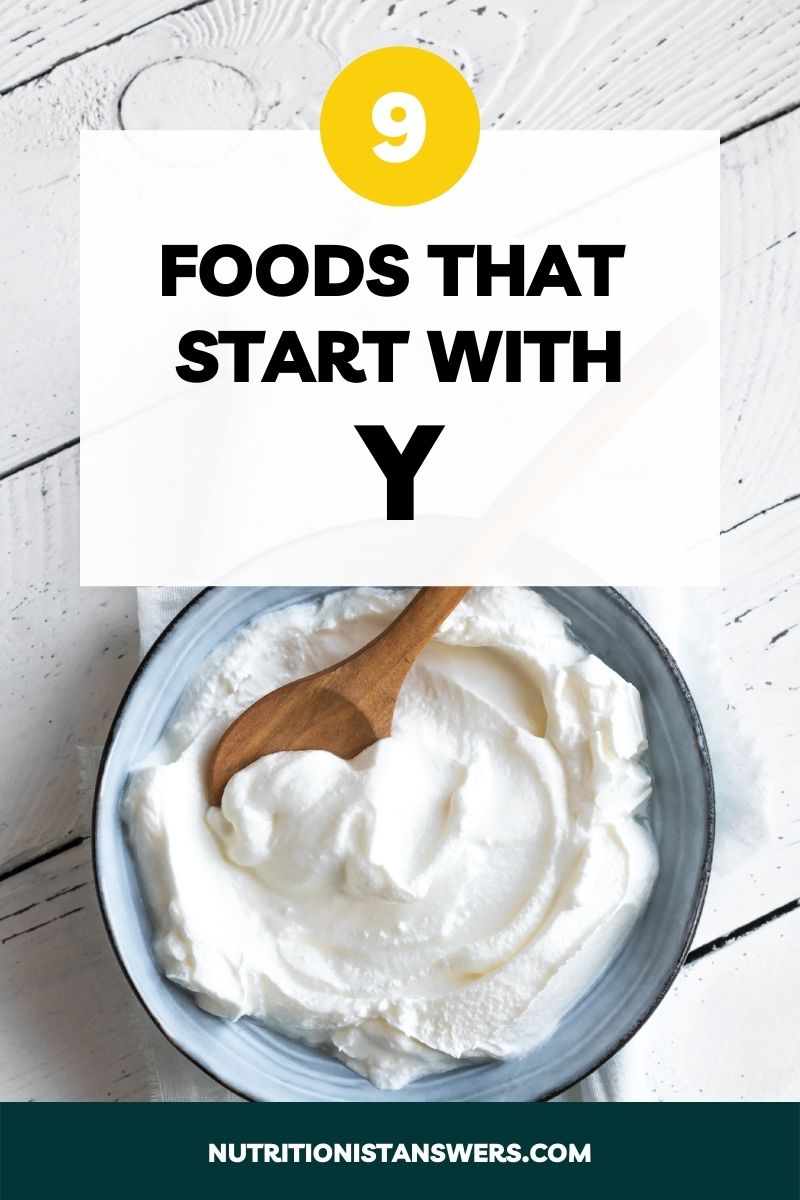 Looking for an extensive list of foods that start with the letter Y?

Look no further, we’ve got you covered!

Browse this list of 9 foods that start with Y to get some new cooking inspiration, learn more about where each food comes from, and understand the health benefits of each food.

Please note that this article contains affiliate links. If you click one of these links and make a purchase, we may earn a commission. As an Amazon Associate, we earn from qualifying purchases.

It looks similar to a long, skinny potato with tan-colored skin and crunchy white flesh. But it tastes sweet, like an apple or a pear.

Yacon syrup is a caramel-like sweetener made by extracting the juice from yacon root and reducing it to a thicker consistency.

Both the root and the syrup are very high in fructo-oligosaccharides, a type of fiber that promotes the growth of beneficial bacteria in the gut (3, 4).

Yams are root vegetables belonging to the Dioscoreaceae family, native to West Africa, Southern Asia, and the Caribbean (5).

They have rough, brown skin with mildly sweet flesh that can range in color from pale yellow to orange, to purple.

Although their names are often used interchangeably, sweet potatoes and yams are different vegetables. They aren’t even related, despite their similar appearance and flavor.

Yams can be found at African or Latin food markets, as well as some supermarkets. They can also be purchased online.

Use yams in any recipe that calls for sweet potatoes. Try them baked, roasted, fried, boiled, steamed, or mashed.

Look for yardlong beans at Asian food markets, specialty produce stores, and farmers markets, or consider growing your own.

You can use them in any recipe that calls for green beans, but they’re especially delicious in stir-fries. Try the popular Chinese dish, Sichuan dry-fried green beans.

Yellow eye beans are an ivory-colored variety of bean, named after the yellow-brown patch that surrounds the bean’s hilum (eye).

This unique bean is very popular in the state of Maine, where it is prized for its soft, creamy texture and mild flavor that goes with just about anything.

Finding yellow eye beans can be tricky depending on your location, but they are usually available (dried or canned) online.

Yellowfin tuna, a type of “ahi tuna,” is a species of fish found in tropical oceans throughout the world and is known for its bright yellow fins (11).

The shiny raw flesh is bright red and translucent with a firm texture. When cooked it turns a tan color and takes on a more meaty texture.

Enjoy this tasty fish in a poke bowl, a classic Hawaiian dish made with raw, marinated chunks of yellowfin tuna served over a bowl of rice and topped with fresh veggies.

Yerba maté is a tea-like beverage brewed from the dried leaves of Ilex paraguariensis, an herb native to South America (13).

It is a very popular drink in Paraguay, where it is beloved for its bitter, earthy flavor (14).

Loose-leaf yerba maté can be purchased online or from health food stores, while bottled versions of the brewed beverage are available at many supermarkets.

Enjoy this energizing beverage on its own, or add a little bit of sweetener and lemon, orange, or grapefruit peel for a boost of flavor.

Yogurt is a fermented dairy product made by combining milk with live bacteria, specifically Streptococcus thermophilus and Lactobacillus bulgaricus (16).

During fermentation, these bacteria break down the lactose in milk to form lactic acid, which gives yogurt its characteristic sour taste and thick consistency (17).

In addition to being high in calcium, yogurt serves as a source of probiotics — “good” bacteria that improve gut health (18, 19, 20).

At the grocery store, you’ll find a large variety of yogurt products, including Greek yogurt — a thicker, higher-protein yogurt made by straining most of the whey from regular yogurt.

While most yogurt is made from cow’s milk, non-dairy options made from soy, coconut, and almond milk are becoming increasingly popular.

Enjoy yogurt with fresh fruit and granola, or get creative and add some to sauces, dressings, marinades, dips, and baked goods.

The youngberry is a cross between a blackberry-raspberry hybrid and a dewberry. It was first cultivated in the United States in 1905 (21).

As they ripen, youngberries change from bright red to dark purple — they look and taste similar to blackberries, but tend to be smaller and sweeter.

Youngberries can be tricky to find in the United States but may be available at some farmers’ markets. They’re more popular in Australia, New Zealand, and South Africa.

Due to their delicate texture, youngberries tend to fall apart when added in baked goods. Try using them to make jams, jellies, and fruit sauces instead.

Yuzu, also called yuja, is a hybrid citrus fruit that originated in China and is now grown in Japan and Korea (22).

It has bumpy green skin that turns bright yellow when ripe, and juicy flesh known for its very tart flavor. Some people say it tastes like a combination of grapefruit, mandarin, and lemon.

Similar to other citrus fruits, yuzu is an excellent source of vitamin C, as well as flavonoids — a group of plant compounds with antioxidant and anti-inflammatory effects (23, 24).

Asian food markets often carry bottled yuzu juice and dried zest. Because it can’t be imported into the United States, fresh yuzu is more difficult to find but may be available at some farmers’ markets.

Use yuzu juice to make ponzu, a classic Japanese dipping sauce, or add a few drops to salad dressings, beverages, and desserts for a little extra tang.

From yacon to yuzu, there are plenty of delicious foods that start with the letter Y.

We hope this list has inspired you to be adventurous and try some new foods, or to gain a new appreciation for some of the foods you already eat every day.

Comment below to let us know which of these foods are your favorites, and how you use them in the kitchen!

Amy Richter is a Registered Dietitian Nutritionist based in Missouri. She is an experienced nutrition writer and medical advisor for Healthline and Medical News Today.  Amy is passionate about all things food-related and enjoys translating complex science into easy-to-understand articles.